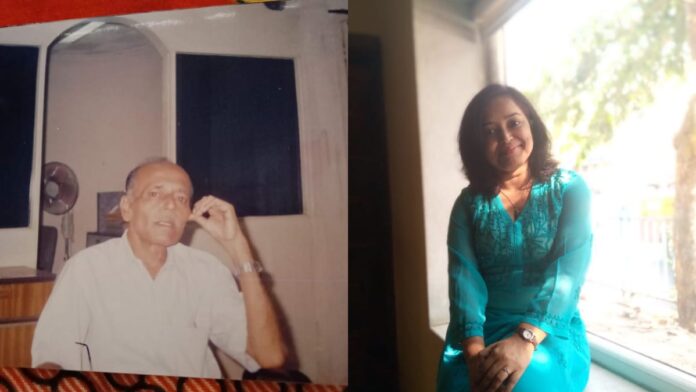 Anasua Ghosh is a well-known author based in Kolkata. Anasua has published two books and working on her third one which will come out in 2023. On this men’s day, Anasua takes out time to remember the man who shaped her life and turned her into the powerful woman she is today – her father Swapan K Ghosh.

‘I am my father’s daughter,’ says Anasua with pride. ‘Me and my sister Aditi, both are. When you see us, you will see our father, his teaching, his lessons, and his never-say-die attitude.’

Swapan K Ghosh was a fighter by heart, who never backed away from the challenges life threw at him. ‘And life threw them in plenty,’ says Anasua. ‘Since the days of my childhood, I have seen dad be struggling to give us a comfortable life. To do that, he sacrificed everything. Never bought a thing for himself, never fulfilled any of his wishes, never allowed us to understand the hardship he had faced to run the family.’

Swapan K Ghosh passed away on the 29th of December 2005. ‘Losing dad is the greatest loss of our lives. Once he passed away and the protective shield vanished, we understood the true color of the world. Dad’s challenge was not only in running the family, but also staying calm when things fell apart.’ Anasua smiles a fond smile. ‘He had immense mental strength which made things easy for all of us when he was around. But the moment he passed, some masks slipped and true faces came out.’

Swapan K Ghosh had been an ardent football fan who played football himself. ‘Dad taught me football. He explained football formation and off-side rules like a coach. Eventually, that grew into a deep love for football.’ Pauses Anasua. ‘From football to discipline, he is everywhere in our lives, if not physically. I am a Bengali medium pass-out who could not construct a single sentence in English in school. It was dad who taught me English and brought me up in a way that now people get shocked when they come to know my educational background.’

Swapan K Ghosh was a motivator in life. He motivated his daughters to follow their dreams. ‘Had it not been for dad, I would not have dared to dream of being a writer. He had never put pressure on us to pursue any stream or score high in exams. I was poor in science and always scored low. The best thing was – dad understood.’

Mr. Ghosh was a talent that did not get the chance to flourish. He was a talented footballer, a great speaker, and an honest spiritualist who helped people without asking for anything in return. ‘I try to carry forward dad’s legacy,’ says Anasua, who is also a famous life coach. ‘I help people with meditation, magnetism, and manifestation because I have seen dad doing it passionately. He had been respected everywhere. Even though he could not make a lot of money due to his honest nature, he is still remembered and missed.’

Anasua Ghosh has been recently featured on multiple platforms for her upcoming novel The Ripper. Even though exhilarated, she misses her father immensely. ‘Each accomplishment brings the same questions – what would dad have said today,’ says Anasua. ‘When he was alive, I did not tell him. Now, I will never be able to tell him that he means the world to me. Behind this successful woman, there is that man.’

Andrew J Nadar: Committed to Excellence in the field of Commerce...

Bring the beauty and aesthetics of nature to your doorstep with...