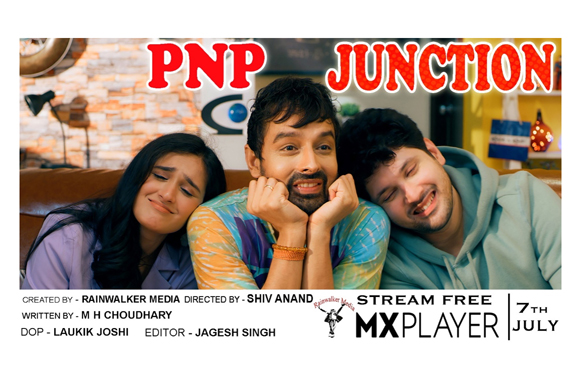 Every other day, OTT platforms in the country are launching path-breaking content in the form of a web series or a movie. Whether it is Mirzapur, Special Ops, A Family Man or Gullak, the web series culture in India is passing through, perhaps, its best phase ever. The latest name to join the bandwagon is PNP Junction, a comedy web series, which started streaming on MX Player from July 7. The makers of the series are marketing PNP Junction as a “super funny laugh riot scrip.” While the show has generated quite an excitement among the young audience of college-goers, Marine Engineer-turned-actor Piyush Gupta is elated at making his OTT debut with this series, which he is producing as well.

Piyush, who belongs to Pilibhit in Uttar Pradesh, began his journey towards a seemingly impossible dream of becoming an acclaimed actor and after featuring in a number of music videos and short films, his quest to excel could reach a culmination with PNP Junction.

Talking about his shift from a stable career in marine engineering to an uncertain one like acting, Piyush explains, “Having scored All India Rank 3303 in the prestigious IIT JEE exam, I had developed a strong liking towards Physics, Chemistry & Maths as subjects. But my core passion always remained acting. The script of PNP Junction is a satire on today’s engineering students and hurdles they face while trying to woo girls. This super funny script was already close to my heart, therefore, I chose to produce it as well. My co-actors, Pankhuri Awasthy and Aditya Deshmukh, also loved the concept, which bolstered my confidence too.”

Apart from a superb acting line up, PNP Junction also boasts of wonderful music, which is made up of 6 peppy, upbeat songs, written in the language that would resonate with today’s young generation.

The showmakers promise that PNP Junction would take the audience back to their college days, when one would get caught in several embarrassing situations while juggling studies with fun. Instagram – https://www.instagram.com/p_i_yush/.