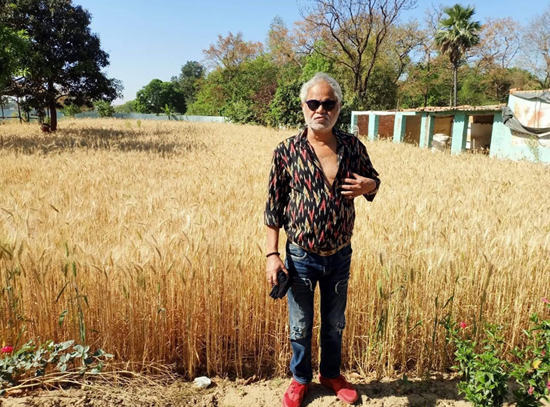 Isn’t it heartening to see a bunch of men come together to tell a story that furthers women empowerment? Well, Jaaiye Aap Kahan Jaayenge is just that film. The humourous drama, written and directed by Nikhil Raj highlights the simple yet pertinent issue of women lacking access to basic needs, that triggers many health issues. The film is produced by Fun Entertainment and co-produced by Purajit Productions & Shooting begins 15th October in Lucknow.

Leading the brigade of powerful actors is Sanjay Mishra, whose name is synonymous with films that convey so much more than just entertainment. Alongside Mishra, are the film’s other leads Karan Aanand and M Monal Gajjar. One may recall Aanand from Gunday and Kick, amongst other hits.

Talking about the movie, Mishra says, “I found the concept of the movie very interesting and it’s told with a lot of heart. The film is a story of relationships in a family. How men break away from their conditioning is written with care and compassion. I am looking forward to shooting this movie.”

Karan Aanand tells us, “For me, sharing screen space with Sanjay Mishra is a huge honour. He is an actor who is so sure of his craft that to be in the same frame as him, you need to step up and put in your A-game. I am so excited to start shooting for the movie.”

Lead actress M Monal Gajjar further added I feel so happy and overwhelmed to be able to play such an interesting character in this film. What makes it even more special is that I get to share the screen space with the one and only Sanjay Mishra. Jaaiye aap kaha jaayenge is a very special film by Nikhil Raj director & writer of the film. I am really excited to start the shoot and share it with all my friends, fans and family. I am very positive that people will love the subject like this.

Director Nikhil Raj says, “I have attempted to put together in a story all those characters that I have had a personal experience with in my life. I believe that women are the pillars of strength for our society however even in the 21st century a village or a city woman still face a very common problem of bladder pressure outside their house. I have tried to touch the subject through real characters and relationships but in a mildly humorous way.  I hope my audience will comprehend the undertone emotion.