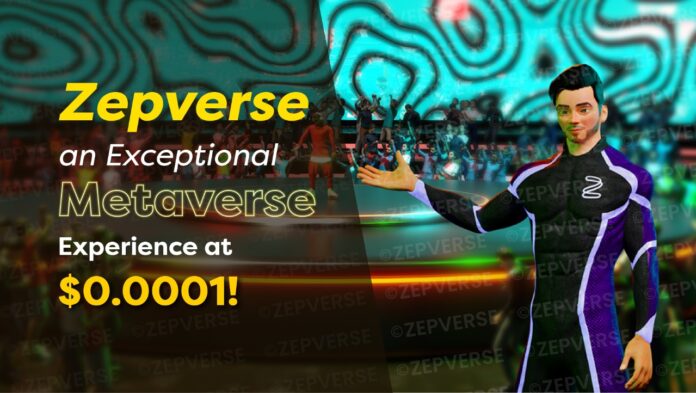 The ongoing phase I ICO of Zepcoin has recorded a sale of 100 million Zepcoins within 24 hours. Even after the downfall in the value of other cryptocurrencies, the Zepcoin project has successfully managed to sell more than 5 billion Zepcoins through the ICO to the public and raised over half a million dollars in just 20 days. The Zepcoin ICO was initially launched at the price rate of US$0.0001 per coin to raise US$2 million from the public to fulfil the objectives of the initial coin offering. This indicates the public craze of entering into the metaverse space, Zepverse.

Visit https://zepcoin.io/ to buy the ICO.

The ICO of Zepcoin comes with ambitious objectives, with a primary goal to develop its Metaverse world, called Zepverse. The launch of Zepcoin has been historic as from the first day of opening, Zepcoin has been a matter of discussion among crypto enthusiasts. With this unique project, Zepcoin signifies the long-term ambitious goals and objectives through its white paper.

Entertainment to Earning spectrum of Zepverse

Zepcoin is the only ICO project in India that is working rigorously towards the development of Zepverse. Zepcoin, on its futuristic project of Zepverse, expands the Metaverse possibilities by adding many services, from movie-watching facilities to shopping facilities, from entertaining people to opening multiple earning opportunities for people around the world.

The first phase of the Zepcoin ICO has been open for 50 days and this ICO is to close on 20th November 2022. The Zepcoins are already listed on popular exchanges, and a few collabs are in the process. The company has planned to launch the second phase of the ICO to release nearly 26.8 billion Zepcoins with a price rate of US$0.0005 per coin to raise nearly US$13.5 million from the public.

The Zepcoin is to register a growth of 500% in value. From US$ 0.0001 per coin in the current phase of ICO to US$ 0.0005 per coin in the second phase of its ICO. The positive review from many institutions and experts and the great response from retail and individual professional investors led Zepcoin, one of the most successful ICOs in the last two years.

The current market conditions and the recent downfall in the crypto market have forced many traders and retail investors to exit due to the panic in the market. However, as per the general teachings of investment, investing money in the dipped market is the better strategy for investment. The current price of the Zepcoin coincides with its lowest value possible, so as per many experts and institutions, people could invest in this ICO before the completion of the ICO phase I, i.e. 20th November 2022.

Many experts and institutions predict that with the positive trend in the market, the sale of the Zepcoin ICO can grow unprecedentedly. More than 30% of the Zepcoin ICO is still left to be sold. However, the recent updates signify the great possibility of Zepcoin ICO being a successful ICO. With the current pace, the Zepcoin ICO may create a history to get sold 100% by the closing date of the ICO.

FREE Dubai trip and Giveaway worth US$1.25 million

Apart from the Zepcoin ICO, users can also add the Zepcoins to their wallets through the airdrop deal. With a few easy steps, a user could get the airdrop of Zepcoins in their wallets by increasing awareness about the coin and the ICO on the social media platforms as instructed by the company.

The distribution of Zepcoins through an airdrop deal will take place with the lottery system. Many participants will get the airdrop of Zepcoins in their wallets.

The distribution of Zepcoins through the airdrop deal is as follows-

Along with the Airdrop of Zepcoins in the wallet, a few participants will also get the opportunity to go on a trip to Dubai for three days.

Visit https://zepverse.io/ to know more about the project.