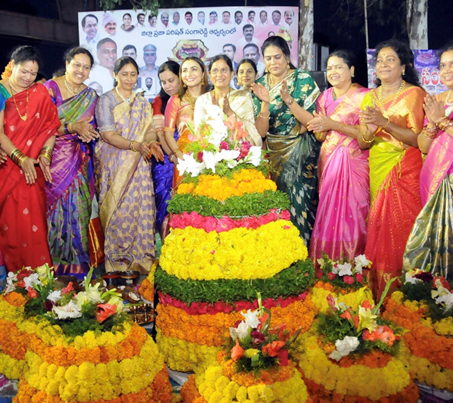 The Bathukamma festival (celebrated only by women folks) is the pride of Telangana and showcases the cultural diversity of the region. These celebrations have, over the years, turned out to become the symbol of the Telangana State. This is a week-long celebration where women, along with their entire families, arrange freshly picked flowers and stack them in rows on a brass plate called “Taambalam”. With the passing of days, flowers are stacked upon each other in a circular manner on the brass plate, making alternate patterns that are called “Bathukamma”, making it larger by day (The bigger the better). The final day of celebrations witnesses the women folk dressing up in vibrant colours and gathering around the Bathukamma’s in circles reciting folklore songs.

These final-day celebrations were organised at the Zilla Parishad Headquarters by Chairman Patlolla Manjusri Jaipal Reddy. Adding to the glory of the night were the attendees, who made the light of the stars seem dim that night. Amongst the major attendees were Sunita Laxma Reddy Garu (Telangana State Women Commission Chairman), Srinitha Harish Rao Garu (Leading Business Women and wife of Telangana State Health and Finance minister Harish Rao Garu), Singer-Producer-Philanthropist Dhrriti Saharan Reddy, and Renowned Handloom Designer Mamatha Tulluri, the District Collector, the District Police, and all the District Officials. Following them were the 1000+ attendees, who skyrocketed the celebration with their beloved leaders. 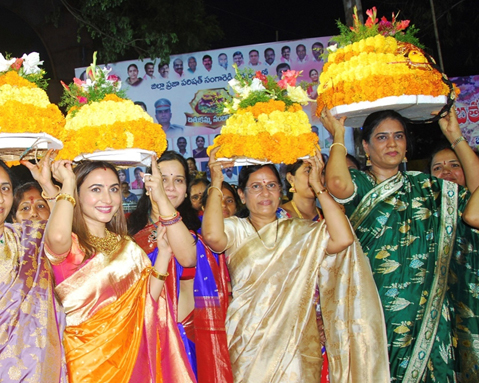 The celebrations commenced post The Minister for the State Rank Patlolla Manjusri Jaipal Reddy offered her prayers alongside the honourable women dignitaries. Following prayers, started the celebration as these women shattered their chains of responsibilities and embraced the freedom in the air by singing songs and dancing to their souls. One of the highlights of the celebrations was to witness the Zilla Parishad Chairperson exchange dance steps alongside her daughter-in-law, Dhrriti Saharan Reddy, showcasing their strength and love for each other.

The Bathukamma Festival is of great importance to the people of Telangana, who revere nature and its beauty. And thanks to Honourable MLC Kalvakuntla Kavitha and Telangana Jaagruthi for making Bathukamma an Internationally Renowned Festival. It’s importance lies in what it stands for; the inherent relationship Human Beings share with Nature.