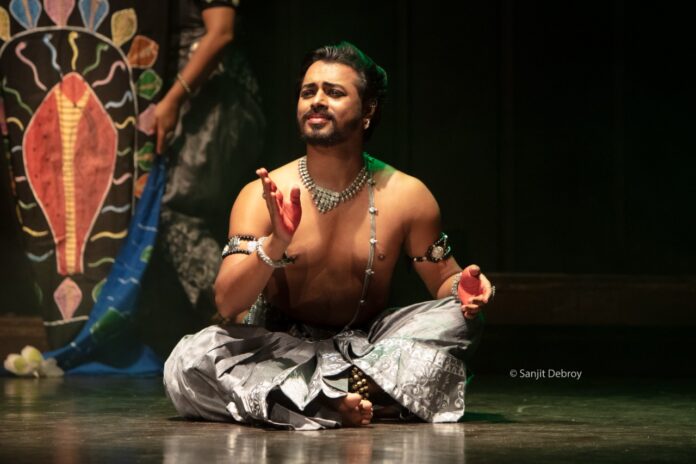 It was a visual treat to witness a global collaboration of artists from Kolkata, Delhi to Seattle, Washington, the USA, on Aug 22 evening at Stein auditorium at Indian Habitat Center Delhi. The main attractions of the evening were “Mukti- A quest for freedom,” a solo contemporary Bharatanatyam production from Seattle, USA, and a dance drama “Manasa- churning within”  by Subhangik led by Subhajit Khush Das from Kolkata. In addition, two teenagers, Tonoya Biswas and Ishrita Varshney from Seattle’s presented a beautiful Bharatanatyam invocatory number and Seattle’s non-Profit Sadhana-supported Delhi’s Kathputli colony artists’ puppet dance.

The show started with two American teenagers of Indian origin presenting Shiva Panchakshara stotram with Natesha Kauthuvam. It is a good feeling to see these teens keeping up Indian traditions even though they are settled abroad.

“Mukti- a quest for freedom” is a research-based deep thought-driven solo contemporary Bharatanatyam production scripted, conceptualized, and choreographed by Smt. Piyali Biswas De, from Seattle, USA. India got Freedom after centuries-long struggles and sacrifices in 1947. Now, we are standing in the twenty-first century in this pandemic world. Are we free? Are we doing justice to the Freedom earned from a bloodbath for years? Instead, humans are fighting within themselves, hurting, stealing, and killing each other—the ongoing struggle with race, color, caste, and religion worldwide. Brilliant music is used globally with collaborations from Chennai to Seattle, San Diego, New York, Kolkata, and Bangladesh. Freedom poems in the dance production range from Maya Angelou and Amanda Gorman to Rabindranath Tagore. Languages used mainly English, Sanskrit, Tamil, and Bengali. Captivating, powerful dance by Smt. Piyali Biswas De enthralled the audience with her sharp moves and brilliant expressions. She started with ancient popular rig Veda Mantra “saṃgacchadhwaṃ saṃvadadhwaṃ.” to celebrate unity in harmony. Then, soloist dancerPiyali personified Freedom to question next, “When we are born, who decides our color, caste, and religion? Why are you so obsessed with mine vs. yours? Jesus, Allah, Waheguru, Deva, Adonai! Why are you so obsessed with God vs. God? Nature is limitless; freeing the soul is the only way to achieve Freedom. An unconventional Thillana, as a few audiences mentioned, “cherry on the top,” sent the message to revitalize the truth of life rather than fighting within ourselves. We can thrive by thinking good, saying good, and only doing good. In the concluding part, an influential dance sequence from Tagore’s famous poem” where the mind is without fear” where caged personified Freedom was finally freeing itself to awaken the world. The chief guest of the evening, Smt. Arshiya Sethi, a Fulbright Fellowship for Arts Management and former Creative Head- Programmes at Habitat World, India Habitat Centre, New Delhi. Arshiya Ji commented, “Piyali has a gift of abhinaya, and she is glad that she is further taking more training from Smt. Priyadarshini Govind  I am also impressed with her outreach to marginalized artists. Usage of powerful poems is so apt for this world now. Such a passionate presentation.”

as per Piyali, “as a Bharatanatyam performer, I wanted to show that Bharatnatyam is limitless and the most expressive and intriguing art form to explore the current situation of the modern world. Indian Classical dance is beyond religion and mythology. It is the most potent form to send the message to the masses to awaken their souls. “Mukti” talks about what is happening in the current world. It is high time to address global problems through Indian Classical heritage. Our Classical music and dance have so much depth and intriguing effects on the human mind, thus sparking more awareness and discussions when it questions social issues. Indian classical dancers should be encouraged more to explore more complex social problems. “

“Manasa- the churning within,” a dance drama by Subhangik from West Bengali led by Subhajit Khush Das, is a solid ending for the evening. This dance drama adaptation of the Padma Purana by Bijay Gupta. Indian folklore and culture have consistently built a bridge between the GODS, GODDESSES, and us humans. Especially in Bengal, we often see the Devis are treated like their own daughter, a part of their family. In different parts of Bengal, we often find Devis who are not mentioned in Vedas. MANASA is such a Devi of Bengal’s folklore. It is believed she came to Bengal with the Dravidians, who worshipped her in the hope that she would protect them against snakes. Manasamangal Kāvya is the oldest of the Mangal-Kāvya. There are many versions of MANASA Mangal Kāvya by different poets. In this presentation, they have taken verses from Bijay Gupta’s Padmapurana. We all know the story briefly, how the snake-goddess Manasa established her worship in Bengal by converting a worshipper of Shiva ( Chand Saudagar) into her devotee. Based on Bengali and Sanskrit (sloka) with Sholkas and Panchali compositions, music is created in Kolkata with a talented musical group. The costumes and props are so vibrant, which are all designed by Subhajit himself. He is such a talented dancer, and his vision to promote Bengal folklore to bigger audiences with another expert set of young dancers is exemplary. A few moments are the peak of the dance drama. Subhajit himself acts as Behula traveling to heaven, facing many dangers during her incredibly long journey to heaven, sometimes the thunderstorm, sometimes the heat, sometimes the wild animals, and sometimes the magical illusion, all played by angry goddess Manasa. Showing thunderstorms with white dupattas by dancers or troupe dancers enacting as wild animals or Subhajit as Behula himself dancing endlessly like nobody ever danced before to please gods and get back the life of Lakhindar. The Grand Finale with props and vermillion on stage is grandeur, showing how Goddess Manasa is worshipped in Bengal after firm Shiva devotee Chandsaudagur gives Anjali to Manasa. Chief guest Arshiya Ji was also enthralled by this troupe and mentioned that with costumes, choreography, music, prop design, expressions, and movements, the Subhangik troupe is an actual storyteller group beyond any language. Subhajit proves himself a future leader in Bengal arts and cultural scenario indeed.

As per Subhajit, “This project is a story from Bengal. As an artist, I wanted to explore and I wanted to present the richness of Bengal in terms of art and literature. Maa Manasa, the Goddess who was not bestowed with divinity but had to earn it. The churning of the stagnancy of classical text and the newfound crisis of human existence gave birth to the Goddess of the common folks -Manasa. Here we see Lakhindar gets his life back, Chand gets back his sons and business, and Manasa receives the position of Goddess but Behula? What did she get? Only sacrifice, injustice, and humiliation? She is still rowing her ship in the uncertain darkness of the future. The Behula within every woman who sacrificed and never got recognized is rowing to a new land where there is no humiliation for women, no exploitation, no indignity – she is still rowing. The instruments and rhythm used in making this product are associated with that of Bengal. At the same time, the movement vocabulary varies from Bharatnatyam to neo-classical to folk dances of Bengal like sari and bou nach with a contemporary approach.“