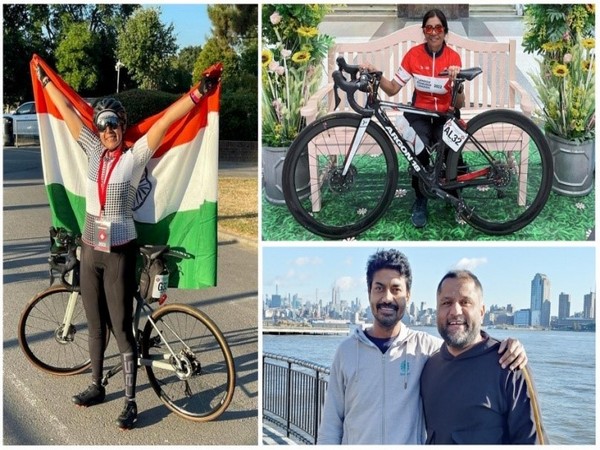 On the work front, actor Vikas Kumar has been an important part of projects like Aarya, Parmanu, CID and others. In the recent past, he started his production house named “KHAN & KUMAR Media Pvt Ltd.”, with friend Sharib Khan. Their debut production, short film – SONSI, qualified for the OSCARS 2022.

They have now started working on a documentary film, an international collaboration with AMMI MEDIA, a New York based company. The documentary is about Indian women cyclists, primarily featuring a 43-year-old mother from Delhi, Gareema Shankar, and a 57-year-old grandmother from Jaipur, Renu Singhi. The film crew just concluded an 11-day schedule in the UK covering the most testing cycling event in the world, LONDON EDINBURGH LONDON – a 1500 km ride to be completed in 125 hours.

While Gareema has been hailed as one of the ‘Heroes of LEL 2022’, the 57-year-old Renu Singhi, became the First Indian Woman Ever to complete the 1500 km challenge within the stipulated time of 125 hrs. The crew followed Gareema and Renu on their journey, and also captured other cyclists, organisers and volunteers at the event. Presence of a film crew on the route through England and Scotland got many folks curious.

LEL Event Director, Danial Webb says, “It was great to see the documentary crew at work recording the story of an extraordinary event. We’re excited to see how they weave the tale of two riders and one of our many volunteers as a way of telling the world about the unique experience of London Edinburgh London.”

Actor and producer Vikas Kumar says, “The crew in the UK took this as a challenge, as a test of their endurance. They were on the 1500 km route for 10 days and witnessed Gareema and Renu’s LEL journey, living through their experiences. While the UK crew was at the event, our director Ameya Gore managed the shoot, coordinating all activities virtually from India using Live Tracking of the cyclists and Google Street View to guide the team on the road. For 10 days, everyone was sleep deprived yet alert lest we miss an important moment. This has been an experience of a lifetime. There are a few more shooting schedules to follow. We hope that when viewers get to watch the film, it will inspire many to take up personal challenges.”