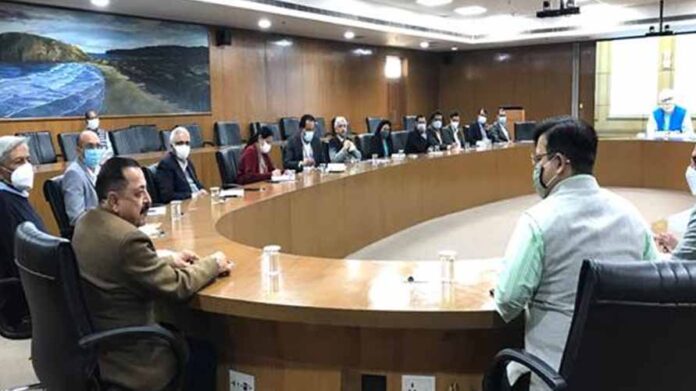 New Delhi, Feb 17: Union Minister of State (Independent Charge) Science & Technology; Minister of State (Independent Charge) Earth Sciences; MoS PMO, Personnel, Public Grievances, Pensions, Atomic Energy and Space, Dr.Jitendra Singh has said that so far, 38 Ministries in Govt of India have sought technical support from the six science and technology departments including space and atomic energy under the Central Government. Together, they have given over 200 proposals/requirements covering different sectors.

Presiding over a high-level joint meeting of all the science ministries and departments at PrithviBhawan, he said that after unlocking the space sector for private players, innovative start-ups are coming in a big way. More than 50 start-ups are working in the industry, and about 10 of them have funding of Rs 50 crore or more individually. Apart from NAVIC based applications, the start-ups are also working on software solutions for debris management in space, having global ramifications.

Dr.Jitendra Singh said that the science ministries and departments concerned are applying different scientific solutions for sectors like agriculture, land mapping, dairy, food, education, skill, railways, roads, water resources, power, coal, and sewage cleaning to name a few. Joint working groups are being set up between science departments and line ministries to speed up the identification of the needed scientific applications.

He noted that with the help of the Capacity Building Commission, a template is also being prepared to take up theme-wise deliberations between Centre and States/UTs. The first round of meetings involving science ministries and departments from the centre and all states and union territories has been completed and demands from the States for scientific solutions are being compiled.

Recalling that Gujarat was the only state in the country to have an S&T policy, he said that after brainstorming sessions over the last four months, 11 more States, including Sikkim, Manipur, and Arunachal Pradesh, are preparing their S&T policy. Each State and Union Territory has been asked to identify the areas where technological interventions can help enable ease of living for the common person. For instance, the UT Government of Jammu and Kashmir will be assisted through the latest snow clearing technology. In contrast, Puducherry and Tamil Nadu are being assisted in the restoration and renovation of their beaches.

He also said VigyanPrasar is being revamped, and it will cater to the communication needs of the six S&T departments, including space and atomic energy. The organisation has been asked to make short documentaries on success stories like Aroma Mission, UV technology installed in Central Hall of Parliament, Heli-Borne survey for water management for wider dissemination.