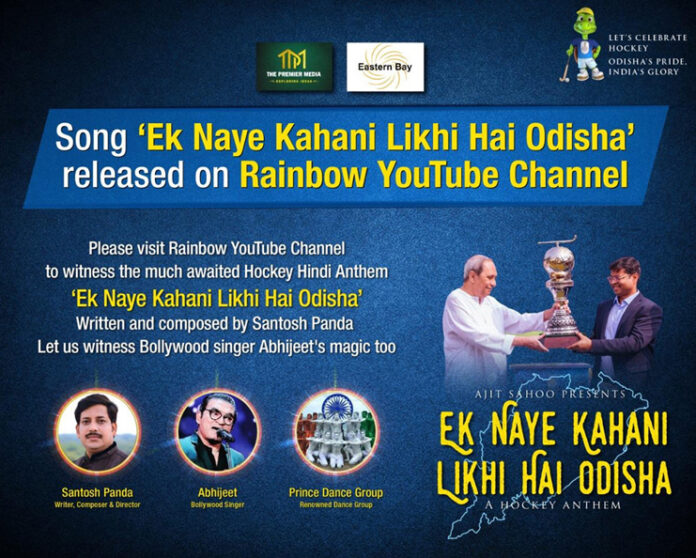 Odisha has contributed immensely to sports and hockey in particular. The world is appreciating the efforts of Odisha. Be it sponsorship, creating world-class infrastructure, or imparting training to create world-class players, Odisha has carved a niche for itself. Against this backdrop, the hockey anthem, EK NAYE KAHANI LIKHI HAI ODISHA, has been prepared by acclaimed writer, composer, and director Sri Santosh Panda. Produced under the banner of Premier Media and Eastern Bay, renowned Bollywood singer Abhijeet Bhattacharya has lent his voice to the song.

Here is the video song:

It is worth noting that former Indian captain and current FIH President Sri Dillip Tirkey has given a hockey stick to writer and composer Sri Santosh Panda after listening to the song. He has shared a tweet expressing his appreciation for the song too. The Hon’ble Governor, who also released the song’s poster and video, has received a lot of praise. for the lyrics and tune of the song, too. He congratulated the team in his tweet. The song glorifies efforts of Hon’ble CM Naveen Patnaik and Odisha’s contribution to Hockey

While recording the song in Mumbai, the singer Abhijeet Bhattacharya appreciated the song’s lyrics and melody and was told that this song truly honours the efforts of Odisha’s contribution to sports and hockey, in particular, the Prince Dance Group, Sai International School, and Mother’s Public School have performed this song. Shooting has been done at Kalinga Stadium, KIIT Stadium, various locations in Bhubaneswar, and Rourkela too. Stock footage and match clips of sports and youth services the department has been used for the song too.

A press conference for the full video release has been held at the Press Club of Odisha in the presence of distinguished guests. Smt. Sulochana Das, Mayor of Bhubaneswar Municipal Corporation; Sri Sangram Paikaray, Chairman of the Khadi Board; noted dramatist and poet Sri Ramakanta Mishra, and senior sports journalist Sri Sambit Mohapatra attended the event as guests. Producer Ajit Sahoo attended the program. along with sports lovers, and sports journalists of various media.

According to the announcement made at the event, the song will be available on the RAINBOW YouTube channel, and the three best dancers who dance to the tune of the song “Ek Naye Kahani Likhi Hai Odisha” will be awarded at a later stage at the state-level event. The song would reach out to many, and people would recognize Odisha’s efforts toward promoting sports and hockey in particular through this song, as told to the media by writer and composer Sri Santosh Panda.