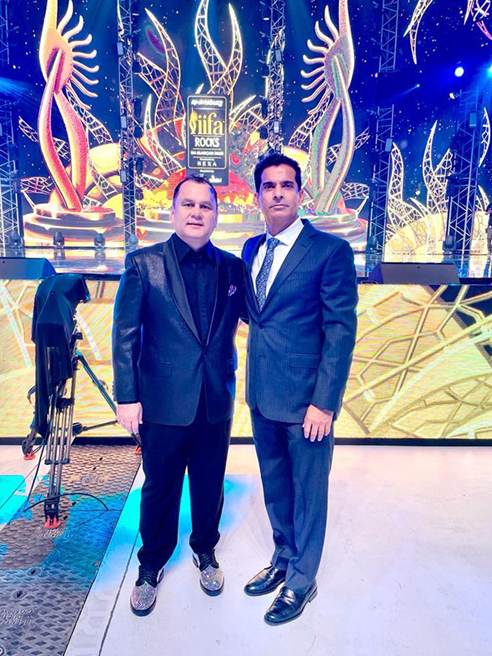 Bollywood’s brightest stars gathered in Abu Dhabi on 3rd & 4th June 2022 as the Indian biggest award night returned “IIFA ROCKS” for the first time since the pandemic shuttered cinemas and turned audiences on to streaming.

Rajender Singh Pahl, well known in the entertainment industry and a notable Show Organizer among the Bollywood fraternity rubbed shoulders with Bollywood glitterati at the concluded IIFA 2022 in Abu Dhabi. As the CEO of Star Promotion Inc. who brought over 125 major shows across North America

Rajender Singh Pahl also has many achievements under his name. “Kucch Bhi Ho Sakta Hai” played by Anupam Kher, The very famous SLAM Tour is one of the most highly acclaimed and successful events organized by Star Promotion Inc. “Unforgettable Tour” Amitabh Bachchan and family. “Awesome Foursome,” with Kajol, Juhi Chawla, Akshay Kumar, Amir Khan, Anil Kapoor and Preeti Zinta, the music show Raja – the One Man, and live concert by the legendary A. R. Rahman, to name a few Other notable music shows included Shaan live in Concert, Abhijeet live in concert, Asha Bhosle live in concert Richa Sharma, Daler Mehndi, Jagjit Singh live in concert, Javed Akhtar and Shabana Azmi. Another proclamation that Rajender received was from Harris County Judge Ed Emmett at the premiere of his event ‘Unforgettable Tour’ at Toyota Centre on August 2, 2008. The day was named ‘Bollywood Day’ by the county judge Rajender Singh Pahl is also the author of the book “Vatan se door”.

In a conversation with Rajender Singh Pahl on his experience attending the IIFA Awards 2022, He recalled the long-standing ovation received by actor Pankaj Tripathi, who won the best supporting role award for his role in Ludo. He was amazed to see the audience’s reaction to Pankaj Tripathi, the whole arena was on feet cheering for him. Pankaj was himself speechless on stage.

He also added by saying he has a special bond with Abhishek Bachchan, Just before the performance we both were talking for about 30 mins in the backstage. I was excited to see him perform after a long time. Abhishek gave a power-packed dance performance at the award show and towards the end, he walked down from the stage and approached his wife Aishwarya and daughter Aaradhya who was sitting in the front row among the audience. The family then took over the show as Aishwarya and Aaradhya danced along with Abhishek. Grooving along, cheering him all the way.

Rajender Singh Pahl Association with IIFA has been a long journey, In 12th edition of IIFA was held in North America, in which Rajenderrepresents north America. He is overwhelmed with the love and affection he got from the Founders of IIFA, Andre Timmins, Viraf Sarkari, and Sabbas Joseph. He said, Organizing huge shows like IIFA and taking Bollywood and Indian culture to different countries every year is not an easy job. Andre, Viraf, and Sabbas as always been very kind to me after the Unforgettable Tour in Houston. I have always received special privileges and was treated like family by Andre and the team.

This year the IIFA 2022 Awards was hosted by Salman Khan, Maniesh Paul, and Riteish Deshmukh. Sidharth Malhotra’s Shershaah dominated the awards this year, with the film winning in as many as five categories. Sardar Udham, Mimi, and Ludo won in two categories each.