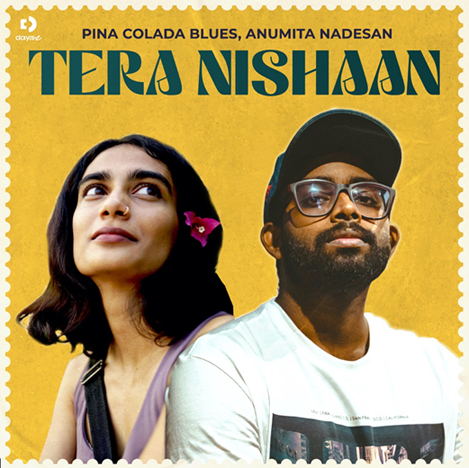 Even when Bollywood music frequently comes under critique, independent songs continue to warm our hearts. Pina Colada Blues’ newest song Tera Nishaan, with Anumita Nadesan on vocals, is one such track that will enchant the audiences. Backed by Day One, a sub label under Sony Music, the song blends intrinsically Indian sounds such as the sitar, Tanpura, Tabla and Mridangam along with trap inspired western beats and pads. Sung by Anumita Nadesan, the pop-fusion number has been penned by Ritendra Dirghangi. For the uninitiated, Pina Colada Blues aka Kevin Shaji is amongst the country’s most promising and fresh electronic producers who dabbles in a cocktail of music genres ranging from pop, and hip-hop to Carnatic. Anumita Nadesan’s healing voice makes her amongst the fastest-rising artists in the Indian indie-pop circuit. She also became the first woman in India to bag the cover of the most prestigious ‘Indie India’ playlist on Spotify.

Though complex in its sound, the song’s vibe is fairly simple. It aims to capture the magical moment in which two people share a glance and begin to feel something special. The excitement and nervousness that moment brings along with the hope it brings for the things that could happen. The music, the melody and the words, all engross the listener and teleport them to a place that feels all too personal, wonderful and familiar. Coupled with the emotion that strikes a chord with everyone, the track fuses pop with soul music. Blending in Indian sounds creates a fresh new age pop number.

Celebrating this unique fusion of Indian sounds with electronica, Pina Colada Blues says, “Tera Nishaan is my second Hindi Composition after ‘Kyun?’ As a composer-producer, I am always on the lookout for how I can mix fresh sounds with the pre existing favourite sounds of mine to expand my soundscape without hurting the original Pina Colada Blues sound.

Tera Nishaan has this really cool blend of Indian instruments that I love with the beats and sounds of western Trap, hip-hop and house music. It features Anumita, one of my current favourite singers in the indie circuit and a fellow Malayali.. it was really fun and cool to work with her for this project. I have been vibing with her music for some time and when she was in to work on Tera Nishaan, I was super excited and we got to jam and do some back & forth which was really an insight to see how she works too. In the lyrics, we have Ritendra Dirghangi, after Kyun?, we have teamed up again this time and we are really happy how the song has turned out!”

Anumita Nadesan adds, “Collaborating with Pina Colada Blues on Tera Nishaan was a seamless process. Creatively we were in sync since day one. Overall it has been fun and I hope we get to work together again sometime.”