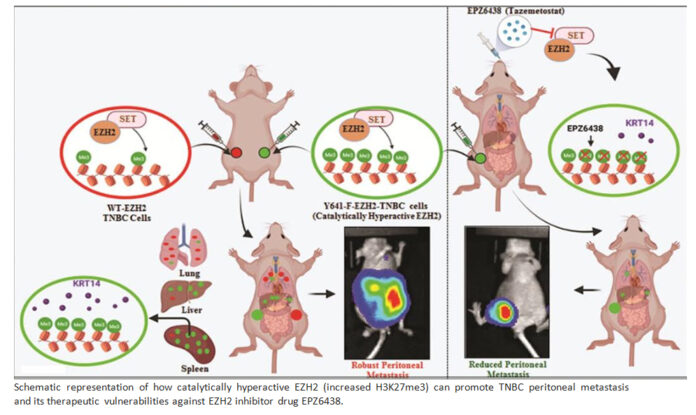 New Delhi, (India Science Wire): If we think of cancer cells as a house, the receptors are the locks of the house’s front door. Triple-Negative Breast Cancer (TNBC) is more challenging to handle as it does not express commonly found breast cancer receptors, e.g., Estrogen(ER) and Progesterone(PR). This leaves doctors with less options to destroy the cancer cells.

Breast cancer is the most common malignancy in women, worldwide, having 2.09 million new cases diagnosed in 2018 with 0.6 million deaths. According to some epidemiological data, TNBC occurs mostly in premenopausal young women under 40 years old, accounting for approximately 15-20 percent of all breast cancer patients. It is highly invasive and poses a severe threat.

“TNBC has a poor prognosis and adverse clinical outcomes among all breast cancer subtypes as there is no available targeted therapy,” researchers write.

The activity of EZH2 has been linked with the development of a tumour/s. It is thought to block the expression of specific tumor suppressors. In cancer, EZH2 functions to promote self-renewal and has been shown to be essential for the tumour-initiating cell (TIC) phenotype in breast cancer.

The team screened samples from the biorepository of the Rajiv Gandhi Cancer Institute and Research Centre, New Delhi for TNBC tumour. Preclinical findings suggest a rationale for targeting TNBC with EZH2 inhibitors. New treatment modalities can be further developed to target TNBC based on these findings.

The research study has been published in Nature Communications.(India Science Wire)

Add Cancer Screening in your To-do list of 2023 as a preventive care!