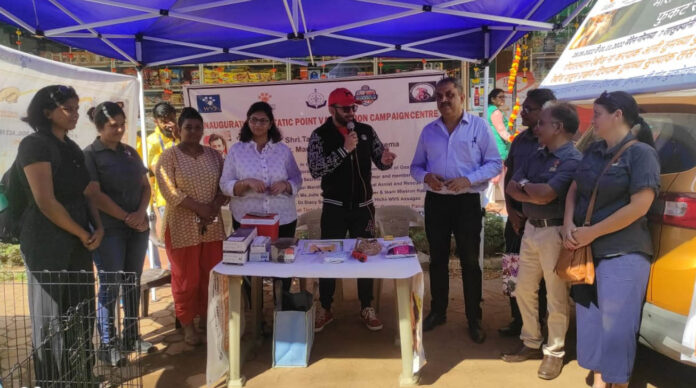 Cats and dogs are probably the most adorable creature to exist in the world. A loyal companion and the key to a free therapy session, pets are the best stress-relievers and the cutest companion. However, we get to see these adorable creatures roaming around with no place to live, nothing to eat, and digging the trash cans. To be able to help them and give them shelter, Actor & Filmmaker Mr. Tapan Acharya inaugurates the Static Point Vaccination Campaign Centre in an opening event held on 25th October 2022.

To give them a new life, a life where they get all the love and attachment and care they deserve to receive, the association saves stray animals and shelters them until they are up for adoption. The organization offers free adoption programs so the animals get to live better and with love, also not letting people be hesitant to rather adopt a pet or not, just because it is expensive. Apart from that, Static Point Vaccination Campaign Centre raises awareness against rabies and its consequences. By taking proper care of our pets, we do contribute a good share in the eradication of rabies. The association works for the better care and good life of stray animals.

The event was organized in the presence of Dr. Marwin Lopes, Rtn. Priti Sheth, Mrs. Nicole D’ Souza, Mr. Pushkaran Marathe, Dr. Murugan Appupillai, Shri Mohan Doss and Ms.Julie Corfmart (Project Manager& team Mission). With the vision to eradicate rabies, Dr. Murugan Appupillai, Dr. Marwin Lopes and Ms. Julie Corfmart have been actively putting efforts to vanish any traces of diseases in Goa. With the support and efforts of the association, Goa is now free from the danger and consequences of rabies. The association further aims to take this welfare movement to the neighboring districts of Karnataka and Maharashtra.

Free health check-ups, sterilization, vaccination, and adoption of pets were the basic attractions of the event. Actor and filmmaker Mr. Tapan Acharya graced his appearance and inaugurated the event, following his message to the mass, raising his voice for saving the lives of stray animals and giving them a better life and lots of love by adopting them. He also talks about the concerns of rabies and how rabies should be eradicated. He was last seen acting in NAXALBARI on ZEE5. He is currently busy crafting and directing Ad film’s and soon will be seen in Music video.

The whole event was organized by a non-profit organization named WVS Hicks ITC which works for humane dog population control and rabies diagnosis and control processes. They organized the event to attract pet lovers and let them choose any pet to adopt from many animals who were saved by the organization.