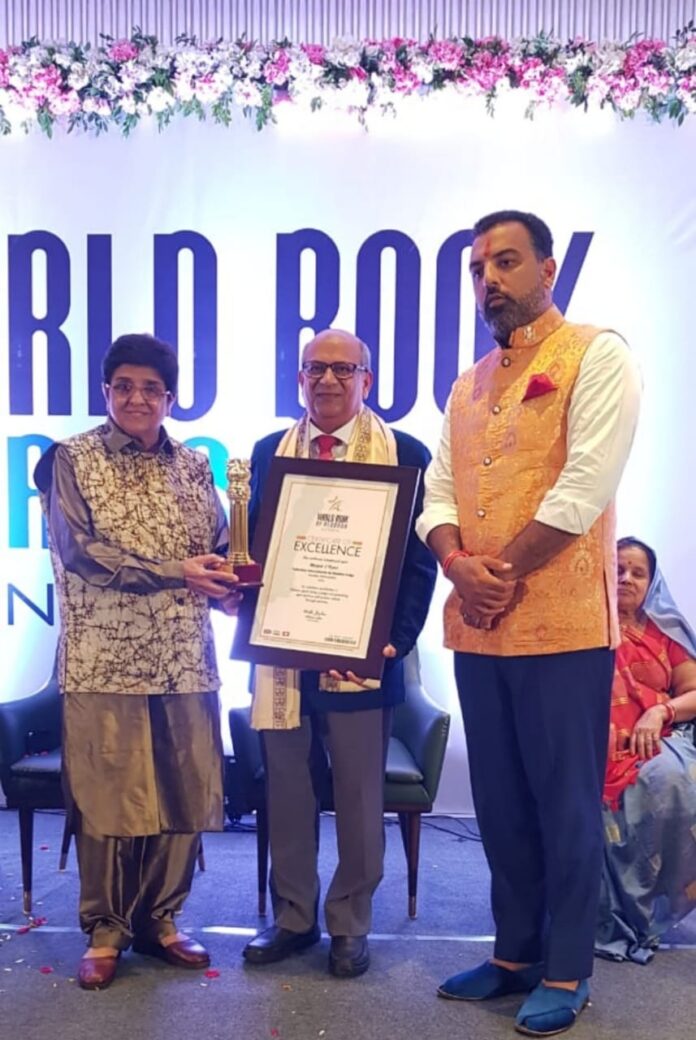 Mumbai (Maharashtra) [India]: Mayur Jansukhlal Vyas, a sportsman living in Borivali, Mumbai and a judge for diving in Rio Olympics 2016 and Tokyo Olympics 2021, was selected for the ‘Life Time Achievement Awards’ by the ‘World Book of Records’ (London) for his invaluable contribution to sports. For which the ‘5th World Book of Records Awards ceremony’ was organized on Monday 22 August, 2022 at JW Marriott Hotel, Indore, Madhya Pradesh, which was successfully completed. On the occasion, the versatile Mayur Vyas was honored with the ‘Life Time Achievement Awards’ at the hands of the renowned Kiran Bedi. On this occasion, Maharaj Kumar Sahib Lakshyaraj Singh Ji Mewar of Udaipur, President & CEO of WORLD BOOK OF RECORDS, Santosh Shukla, Dr. Tithi Bhalla, Satesh Shukla,  etc. and celebrities from politics, Indian cinema and corporate world also participated in this function and made the ceremony successful. On receiving the award, Mayur Vyas expressed his gratitude to all the people associated with the committee and all the people who came.

Mayur Jansukhlal Vyas is currently a member of the Technical High Diving Committee of the World Body FINA, a member of the Technical Diving Committee of the Asian Swimming Federation and the Chairman of the Technical Diving Committee of the Swimming Federation of India. He has also been a judge for diving in Rio Olympics 2016 and Tokyo Olympics 2021, being the first Indian to be a diving judge in two Olympics. Prior to this, as a sportsman for India, he has won a silver medal in water polo in 1976 Junior National and 1984 Senior National he won silver medal in Diving once and Joined All India Railway Sports and was champion there from 1981 to 1988. He was also the coach of Western Railway from 1990 to 2018 and coach of Indian Railway from 2005 to 2018 and retired in 2018. In which Indian Railways was Diving champion in Men and women section champion from 2005 to 2017. He was also the Deputy Competition Director of Commonwealth Games, Delhi in 2010. After that he started to like judging and gave exams for it. He then started judging from the Commonwealth game and started going abroad as a technical diving judge.

He is associated with diving from 1976 till today. On this, Mayur Vyas says, “I never bother or run after awards I, I always focused on sports. Right now our players are performing well. After the Modi government came, facilities have increased and players are getting help. I would like to thank Modi ji for this. And I also thank Virendra Nanavati ji, because of whose guidance and support I have achieved this position and have reached till this level.