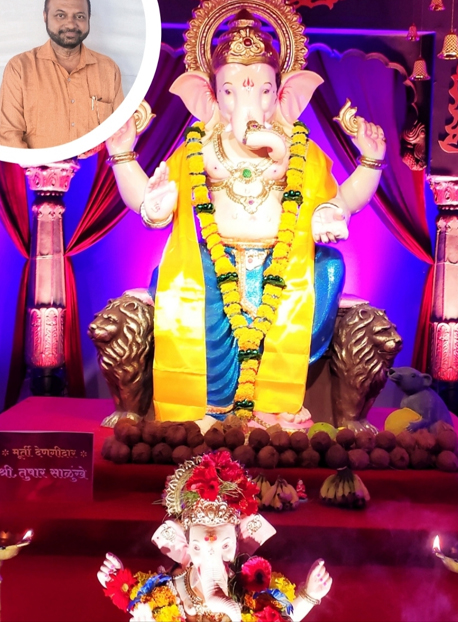 Mumbai (Maharashtra) [India]: The 42nd year of ‘Sarvajanik Ganeshotsav Model Town’ has been organized by Swapnakshay Mitra Mandal at Seven Bungalow, Model Town Road, Andheri (W), Mumbai which is of ten days. Its main guide and coordinator of the Versova Assembly of Shiv Sena are Devendra (Bala) Ambarker, President Rajesh Dhere, advisors Sanjeev Kalle (Billu), Prashant Kashid and General Secretary Ashok More. This time it was organized on the theme of Veer Savarkar’s heroism and Amrit Mahotsav of Independence which is attracting a lot of people.

Devendra (Bala) Amberkar and Rajesh Dhere said, “We always organize programs on social topics. This time we have organized it keeping in mind Vinayak Damodar Savarkar (Veer Savarkar) and Amrit Mahotsav of Independence. Apart from this, information about Mahatma Gandhi, Babasaheb Ambedkar, Bhagat Singh etc., who fought and sacrificed their lives for freedom, has also been tried to be conveyed to the people through paper models and workmanship made of paper.”

TEDxYouth event is conducted for the first time in Basukinath, Dumka