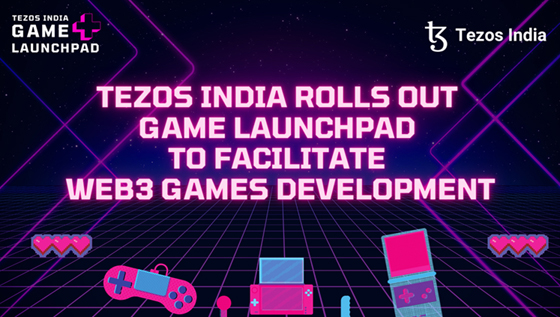 Tezos India – one of India’s leading blockchain adoption entities has announced the launch of its new initiative titled Tezos India Game Launchpad (TIGL), a comprehensive platform that will assist game developers with grants, technical support, game publishing, fundraising and support them launch their games on the blockchain.

Interested game developers can submit their applications with details of the project and roadmap on the TIGL website. The developers will be assisted through technical support, publishing, and fundraising. Initially, TIGL will help integrate Tezosblockchain into the game and assist with token (NFT) development and play-to-earn consultancy.

TIGL’s global partners such as Tezotopia, IndiGG and others will help the game developers collaborate internationally through Strategic Partnerships. Launching Growth Hacks and other bounty campaigns, community building, and social media marketing will also be covered by the initiative. Finally, TIGL will help the developers participate in the prestigious Tezos Incubation Program and receive grants from the Tezos Foundation for growth. Selected developers also stand a chance to work with TIGL’s partner VCs for investment support and gain access to the best game launchpads.

Amanjot Malhotra, Head of Growth at Tezos India, who is spearheading the initiative, said, “There is an exodus of games from Web2 to Web3 as industry leaders have realized the future of gaming is on the blockchain. In this decade, we will see most of the gaming industry moving to the blockchain as the benefits are obvious. To accomplish this, TIGL has formed strategic partnerships with top blockchain games, gaming guilds, and venture capital firms to provide the mentoring and guidance necessary to develop top-notch blockchain games.“

TIGL will provide a gaming handbook that has a collection of 100+ resources to get started with Web3 gaming. As a whole, this will make it simpler to understand the fundamentals of Web3 and how blockchain games are developed and launched. With massive resources at hand, game developers can hit the nail on the head by collaborating with exciting innovators in the Web3 gaming ecosystem. TIGL is a win-win situation for every seasoned game developer and even the aspiring amateur ones!

“Web3 games will be the next big thing as it is opening new economic and creative opportunities for gamers and game developers. There is potential to unlock a $100 billion gaming market. With this initiative, Tezos India is setting the stage for a decentralized future in Gaming where massive participation is expected in times to come”, said Om Malviya, President, Tezos India.

With a 100 billion USD market size, 2 billion users, and 52% transactions on the Blockchain via gaming – this industry is about to switch from a free-to-play to a play-to-earn ecosystem enabled by Web3. According to DappRadar, the number of GameFi users witnessed a 24x increase, with users rising from 343,000 in January 2021 to 8.51 million in January 2022. While the Indian market is still in its infancy, it is well-positioned for the rapid adoption of P2E gaming, thanks to the widespread use of mobile devices and low data rates. TIGL will start its operations in India but at the same time it will look to expand in other emerging markets for the play-to-earn gaming.

As a new revenue stream opens up for game developers and publishers, blockchain gaming is poised to upend traditional gaming business models. Tezos India Game Launchpad is envisioned to tap the potential of the game developers in India to impart knowledge related to learning, creating, and marketing their games. Through the active participation of developers and publishers, Tezos India’s novel initiative sets the ball rolling for harnessing the power of blockchain technology.

Tezos India is an organization supporting the Tezos ecosystem in the Indian sub-continent and is a grantee of the Tezos Foundation. As innovation in the blockchain space advances in India, Tezos India constantly strives to address key barriers facing blockchain adoption to date in India: developer adoption, education & training, and ecosystem development. Tezos is a self-upgradable blockchain that enables forkless upgrades with its on-chain governance system, improving accessibility and longevity for solutions built and utilized by the Tezos community.