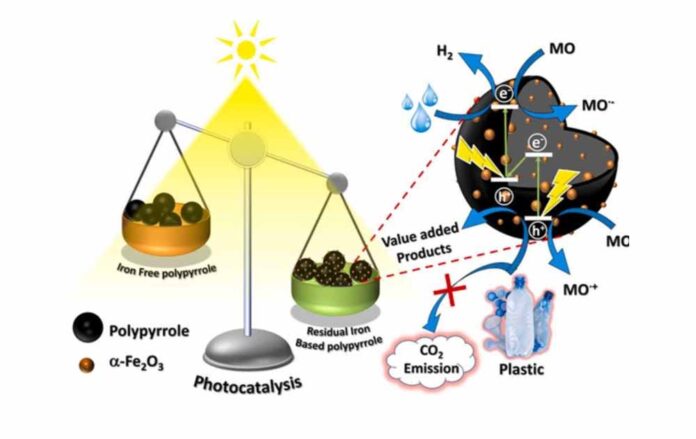 New Delhi, March 23: In a significant development in environmental pollution, a team of researchers from the Indian Institute of Technology (IIT)-Mandi, has developed a method that promises to help transform plastic into hydrogen when exposed to light. The generation of hydrogen from plastics is expected to be more useful because hydrogen is considered the most practical non-polluting fuel of the future.

Plastics, most of which are derived from petroleum, are not biodegradable. They cannot be easily broken down into harmless products. It is feared that most of the 4.9 billion tonnes of plastics ever produced would end up in landfills, threatening human health and the environment.

In the new study, researchers have developed a photocatalyst that efficiently converts plastics into hydrogen and other useful chemicals when exposed to light. The substance combines iron oxide in the form of nanoparticles (particles a hundred thousand times smaller than the diameter of a single hair strand), with polypyrrole, which is a conducting polymer.

The researchers found that the combination resulted in the formation of a semiconductor-semiconductor heterojunction, resulting in strong visible-light-induced photocatalytic activity. Photocatalysts usually need UV light for activation and therefore require special bulbs. The newly developed catalyst can function with sunlight itself.

The researchers found 100% degradation within four hours when they used the catalyst in which iron oxide was present in the polypyrrole matrix in the ratio of about 4% by weight. The researchers tested it on polylactic acid, a plastic extensively used in food packaging, textiles, medical items, and cosmetics industries.

“While the generation of hydrogen is good in itself, we are even more excited that no carbon dioxide was produced as a byproduct”, the scientists said. Most other photocatalysts that have been developed for hydrogen generation from plastics release greenhouse gas as a by-product. The new catalyst, instead, co-produced several useful chemicals such as lactic acid, formic acid, and acetic acid.