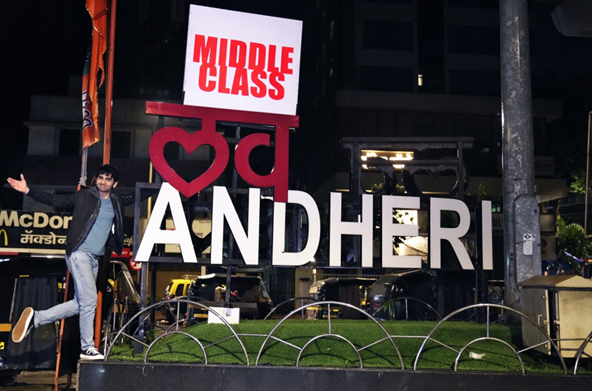 Since yesterday, an intriguing video has been doing the rounds on the internet where a young boy was spotted labelling all the love signs in Mumbai with a board that read middle class. It left everyone wondering about the middle-class boy who was taking over the city’s love signs. The boy in question, is none other than the cola ad fame lad, Prit Kamani.

Ad-film actor, Prit Kamani, has gone around Mumbai city’s public selfie points, coffee shops and even stores which had the word love in their name and pre-fixed it with a middle class sign board. Armed with a ladder and boards which have the words ‘Middle Class’ written on it, actor Prit Kamani was seen placing these boards on top of the letter ‘Love’ all over the city including Bandra, Jogeshwari, Goregaon, Andheri, and Santacruz where the ‘I Love’ signs have been erected for a while now.

That’s not all, Prit also visited coffee shops, general stores and stores which had the word love in their name and was seen placing these boards reading ‘Middle Class’ on it right before the word love.

What’s more, the actor was also seen crashing a popular show on love at a radio station. Prit teamed up with the show’s host known as Love ka Mahaguru and dispensed some middle-class truths.

His antics left us wondering what else does Prit have up his sleeves. What’s the reason behind him hijacking love? Is he doing this to drive home a point about a brand, show or a film?

Talking about hijacking the love signs across cities with ‘Middle Class sign board, the actor says, “Yes, I am bathing the city’s love signs in the hue of middle class. Are you wondering why? What’s middle class got to do with love? Well, you all will get to know this in just a few days as something interesting is coming your way!’

Prit’s antics have given rise to a lot of anticipation. It also left people intrigued about his actions. It’s clearly a guerrilla activity carried out to highlight something that’s going to drop soon. While we will have to wait to know more about that, we can be sure about one thing — Prit’s attempt at breaking the clutter by building intrigue around his next project.

Dedicated for the State of Maharashtra, Contributors making the state proud will be felicitated in “Pillars of Maharashtra Awards”