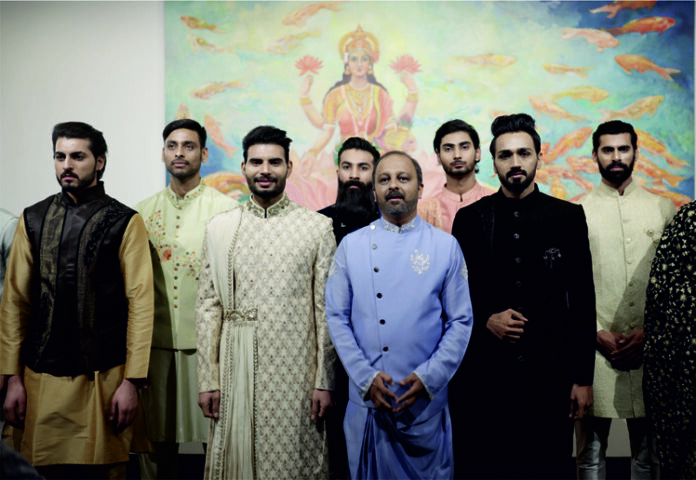 Mehul Suthar is a veteran designer from Vadodara, Gujarat. His menswear Ethnic Collection is very popular across fashion industry.

The ethnic collection sequence along with Indian folk music was very well appreciated by the audience.

Mehul Suthar – The Fashionista, Fashion Blogger, Fashion Writer, Fashion Critic based at Vadodara, Gujarat is a renowned name in fashion industry. Mehul Suthar has been part of many events, fashion shows, fashion weeks, Across India.

With inspiration and guidance from his designer friends Mehul descended into the garment designing segment. His first piece of collection earned him the title of “Navratna Designers” of Gujarat alongside talented names like Heena Modi and Digvijay Singh. Mehul has showcased his Ethnic Collection at Rajasthan Couture Week, IFSW, Central Showcase, Goa Fashion Couture Week, Vadodara Fashion Fest, Lucknow Fashion Week, Indian Designer League and many other fashion weeks/shows.

To promote upcoming talent, Mehul has started Modeling Program which offers need-based solutions for the fashion world, by helping bridge the gap between budding models and the fashion industry. For his work Excellence he has been awarded with many prestigious awards like “Vadodara Gaurav Puraskar” by hands of Shri Bharat Dangar; HFF Award by hands of Geeta Kapoor (Geetamaa); Panache Award by hands of Pankaj Beri to name a few.