New Delhi, Feb 03:  In a supernova explosion, massive stars explode at the end of their lives and emit all kinds of neutrinos and antineutrinos. Indian researchers have shown how neutrinos change from one type to another inside such dense stars in a new study. This will allow learning more about stars and neutrinos, researchers said.

Researchers say that neutrinos in supernovae, neutron stars, and in the early Universe may change flavor (type) collectively and unstably, due to neutrino-neutrino forward scattering. Neutrinos emitted by exploding stars can change their flavor via collective flavor (type) instability. Scientists have identified the ingredient for flavor instability which will have observable consequences for the observations made by telescopes and neutrino detectors.

Neutrinos are subatomic particles, and they are nearly massless and have no electric charge. Unlike the other particles, they only interact via the weak nuclear force. There are three flavors (types) of neutrinos existand differ in the way they interact. The neutrinos emitted in beta decay are now called electron neutrinos, and the others are muon and tau neutrinos.

This study, conducted by researchers from the Tata Institute of Fundamental Research (TIFR), Mumbai, has been published in Physical Review Letters research journal published by the American Physical Society. 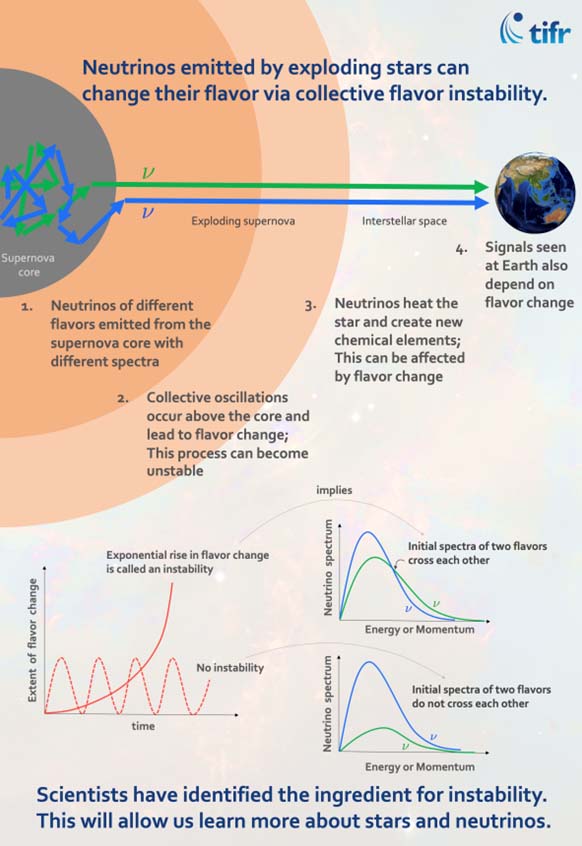 “The main result of this study is a mathematical proof that neutrinos can change their flavor in an exponentially increasing manner only if the spectra for two of the neutrino flavors cross each other at some energy or emission angle”, said the lead author, Prof BasudebDasgupta, who is associated with the Department of Theoretical Physics at TIFR, Mumbai. Spectra is the abundance of neutrinos at given energy or momentum, he added.

The results of this study were obtained using mathematical properties of the equations. Simple tricks from high-school algebra were used to show that the equations governing how the flavor changes with time can have non real number solutions only if the spectra cross each other.

Explaining this study in detail, Professor Dasgupta said that “condition for instability was not known despite three decades of work on the topic concerned. Thus this is a theoretical advance in our knowledge. Further, neutrinos affect how chemical elements are made inside stars and how stars are heated from inside, leading to their explosion.”

The presence or absence of exponential neutrino flavor conversion affects element creation and heating of the star. The abundance of elements and the explosion of the stars can be observed with telescopes; this gives us a new way to study the effects of neutrino instability inside stars. Now that we know the instability condition mathematically, it will allow us to reveal further information from deep within the star that is otherwise impossible to obtain, added Professor Dasgupta. (India Science Wire)