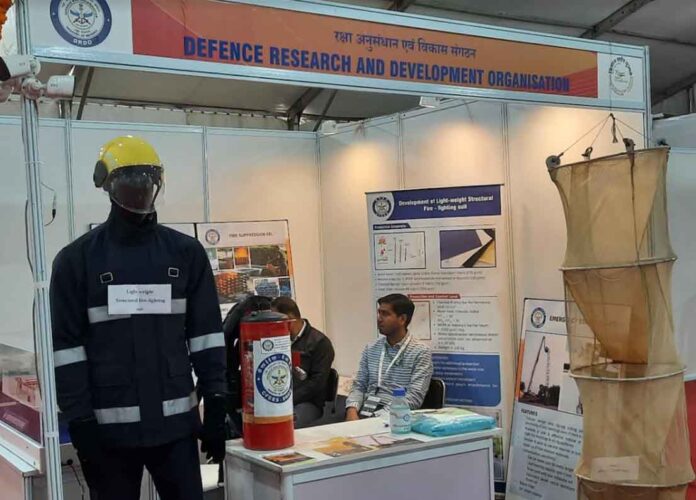 The highlight of the suit is that even as it is made of four layers, it is lightweight and weighs less than 2.8 kg. In addition, it has shoulder, elbow, and knee armour for protection in case the firefighters were to fall accidentally, has a collar flap to protect the neck, and concealed pockets with flaps for ease of movement. The outermost layer is made of an anti-static flame retardant material, and the second and third layers are made of fabrics that act as moisture and thermal barriers.  The innermost layer is again made of flame-retardant fibre.

The suit is one of the main attractions at the science expo that has been set up at the Jawaharlal Nehru Stadium here, a part of the week-long science festival titled ‘VigyanSarvatraPujyate’. Being orgainesd against the backdrop of the Government of India’s year-long “Azadi Ka Amrit Mahotsav” the event aims to pay tribute and showcase the scientific achievements of the 75 glorious years since India’s Independence.

The festival is being held in 75 different cities across the length and breadth of the country, from Kashmir to Kanyakumari and from Kachch to Kamprup. It also marks the National Science Week (22-28 February 2022) and popularises science among the public. VigyanPrasar is coordinating the event, under the aegis of the Ministry of Culture, Office of the Principal Scientific Advisor (PSA) and other Ministries of the Government of India.

Another eye-catching exhibit from DRDO’s CFEE is an emergency escape chute. It is a long tubular fishnet made of Kevlar fibre, a heat-resistant and strong synthetic material. It was first used commercially in the early 1970s to replace steel in racing tires. It is typically spun into ropes or fabric sheets that can be used as such or as an ingredient in composite material components.

The new device assumes importance, particularly in the context of growing numbers of high-rise buildings not only in metropolises but also in middle and smaller cities and towns. It has been designed in such a way that people on different floors can be evacuated simultaneously as the chute can have openings at different levels. It can be made up to 50 metres long and have a load-bearing capacity of five tonnes. The chute can be used with auto inflatable rafts and helicopter-based rescue operations during landslides, floods, and other emergencies.

The programmes during the science festival include a daily conversation with the team of Indian scientists working in the icy continent of Antarctica, film shows on scientists who had laid the foundations of science and technology in the country and lectures by present eminent scientists and technocrats.  It is also showcasing inventions or technologies that made India self-standing. (India Science Wire)