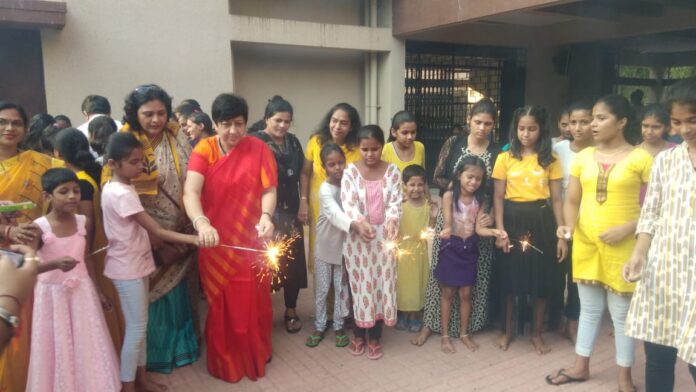 When the nation is celebrating Diwali with Family, Dr Bharati Lavekar an Active MLA and known a Social worker from Versova constituency was celebrating Diwali with Orphan Children and she was seen spending time in Old Age home in Andheri, She is one of the rare politicians who are known for their efforts and hard work towards the upliftment of the society, Her one of a very well known initiative for which she was also honoured by the President of India was for those women who were unable to afford or get access to sanitary napkins, Dr Bharati Lavekar set up India’s first digital sanitary Pad Bank.

The one-of-its-kind bank was inaugurated on 28 May 2017, which is celebrated as World Menstruation Hygiene Day. She has also been instrumental in getting sanitary napkin vending and disposable machines in schools and public toilets. Dr Lavekar established TEE foundation, an NGO based in Mumbai in 2009. This NGO focuses on eradicating and creating awareness about issues like female foeticide, sanitation and hygiene, women’s education and gender inequalities.

She bursted Crackers, Prepared Rangoli and got smiles on those children who are orphan, getting smiles on such children who crave for family when they see the world celebrating this festival with family is a true way to celebrate the festive season.

Marpu Foundation: Leading the Way in Sustainable Development and Volunteering in India

Rahul Borole, a young and dynamic social worker and politician, gained widespread recognition for his philanthropic work around Aurangabad